Dr. David Strangway (1932-2016) joined Development Workshop’s board of directors in 1997 providing our Non Governmental Organisation with wise guidance on advice on developing our research and development project capacity. He visited Angola regularly on the invitation of the Angolan and Canadian Governments. He led several official missions aimed at strengthening Angolan and Canadian bilateral cooperation. In 1996 Dr. David Strangway was made an Officer of the Order of Canada, the country’s highest award, for his internationally respected work as an outstanding scientist and academic.

David Strangway grew up in Angola in the 1940s and 1950s and studied in Dondi in Huambo Province. Dr. David Strangway was, his whole life, a champion of education and science and technology. He studied at the University of Toronto, earning a Ph.D in Physics and Geology in 1960. In 1970, he joined NASA as the Chief of the Geophysics Branch and designed lunar experiments for Apollo astronauts and was the first scientist to examine the returned moon rocks that contributed to the further knowledge of the solar system. In 1983 David Strangway was appointed the president of the University of Toronto in Canada. From 1985 to 1997, he served as the President of the University of British Columbia. From 1998 to 2004, he was the President and Chief Executive Officer of the Canada Foundation for Innovation, created by the Government of Canada to fund research, with a budget of $3.65 billion. David Strangway, founded Quest University in 2007 and served as its chancellor until 2015. He played a key role in helping the Canadian government to create 2000 new Research Chairs in Canadian Universities to stem the loss of Canadian researchers to other countries. Based on the success to this program he campaigned for the creation of a fund for 1000 African Research Chairs to finance African researchers to remain in their home countries to stimulate the growth of African science and technology and stop the “brain drain” from countries like Angola.

In 2015 David Strangway made his last trip to Angola where he presented the key note address to the 4th National Conference on Science and Technology. At the conference he spoke about the book that he was writing on the early medical research work conducted in Angola in the early 20th Century. His research for the book involved searching the public access archives in Angola, Portugal, Canada and the USA together with his own family records dating back to when his family worked in Angola. Dr. Strangway demonstrated evidence of the pioneering research that medical practitioners did, dating back to the late 19th century. Early investigation into chronic tropical diseases such as malaria, sleeping sickness, leprosy and tuberculosis were done by his parents.

Dr. David Strangway passed away in December 2016. DW is sorry to lose David’s guidance as a board member but remains committed to David’s vision of social development through research, innovation and building local capacities. 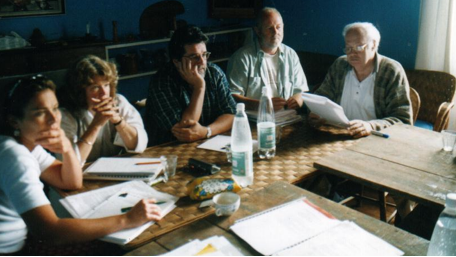 David Strangway chairing a DW board meeting in 1998 in Cubertou France.